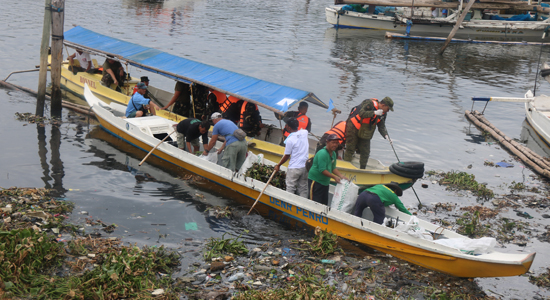 More than 5,000 individuals from the Department of Environment and Natural Resources (DENR) here and other government agencies, local government units (LGU), business sectors, academe and civil society organizations rallied yesterday to conduct massive cleanup of Manila Bay in the three provinces in Central Luzon to avert further degradation of the historic bay and bring back its water level fit for swimming.

Current fecal coliform level in Manila Bay is at 330 million most probable number (MPN) per 100 milliliters. The acceptable level for Class SB water, which is deemed safe, is 100 MPN/ 100 ml.

According to Paquito Moreno, Jr., executive director of DENR regional office, the cleanup was conducted simultaneously in the provinces of Bulacan, Pampanga and Bataan in Region 3, Metro Manila in National Capital Region (NCR) and Cavite in Region IV-A on January 27, 2019 as ordered by environment Secretary Roy Cimatu as the start or “D-day” for the launching of massive cleanup and rehabilitation of the Bay.

“Bringing back Manila Bay to its original state is a gargantuan task for the DENR, which requires a lot of commitment, cooperation and support from other government agencies, local government units (LGU), business establishments, civil society organizations, and other stakeholders,” he stressed.

He said the launching of Manila Bay clean up in Central Luzon was conducted at the Obando river in Barangay Tawiran in Obando, Bulacan; Guagua river in Barangay Sto. Filomina in Guagua, Pampanga and in the more than 700 meters stretch of Mariveles coastline in Barangay Lucanin in Bataan.

“Actual cleanup was conducted in these areas while the total volume of waste collected was more than 5,000 kilograms.  Three thousand mangrove species were also planted in these sites to protect our coastal areas,” he explained.

Moreno emphasized that the phase one of the rehabilitation program is the cleanup and water quality improvement, which involve the actual cleanup of designated esteros and waterways to reduce fecal coliform level and toxic discharges from establishments, and the implementation of solid waste management.

Statistics from the Manila Bay Coordinating Office (MBCO) of DENR in Central Luzon showed that the number of informal settler families (ISF) living along the coastal areas and rivers in Bulacan are 23, 051 while there are also 9,363 ISF in Pampanga and 10,166 in Bataan or a total of 42,580 families.

“Notices of violation (NOV) will also be issued to non-compliant establishments or if appropriate cease and desist orders (CDOs) will be issued, Moreno said.