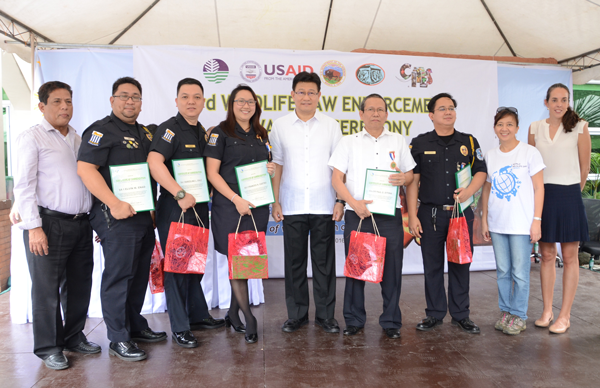 Personnel of the Bureau of Customs were awarded with certificates of recognition for their role in a wildlife enforcement operation at the Ninoy Aquino International Airport in Pasay City in January, which led to the arrest and filing of criminal complaints against a government employee who attempted to transport 46 heads of various wildlife which were subsequently confiscated. The certificates were distributed during the 3rd Wildlife Law Enforcement Awarding Ceremony held in Quezon City in celebration of World Wildlife Day. The ceremony was led by Environment Secretary Ramon J. P. Paje (center, in eyeglasses), US Agency for International Development Environment Officer Dani Newcomb and Biodiversity Management Bureau Director Theresa Mundita Lim (right and second from right, respectively).