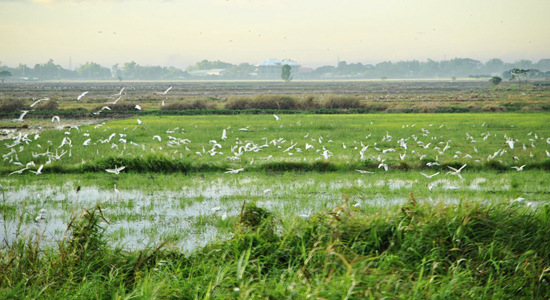 Environment officials here urged the public to protect and save wetlands, particularly the 32,000-hectare Candaba Swamp in Pampanga, as the population and number of species of migratory birds seen in the area continue to decline.

Minerva Martinez, conservation and development chief of Department of Environment and Natural Resources (DENR) regional office said that last year population of migratory birds was only numbered to 1,439 with 30 species based on the Asian Water Bird’s Census conducted by the DENR.

“This number was the lowest recorded rate since 2009. The prolonged dry seasons may have affected the Candaba swamp resulting to low food supply which also eventually affected the water birds that depend on this habitat for sustenance,” she explained.

She said that climate change and land conversion may have affected the ecosystem functioning of this wetland and considered as a continuing threat to our water birds.

DENR records showed a decreasing number of species among migratory birds, from 64 species recorded in 2016, which is also the highest recorded at Dona Simang village, the number declined to 42 in 2017, 30 in 2018 and 16 this year.

Last weekend visit to Candaba swamp in celebration of World Wetland s Day by the team of environment officials, personnel and media practitioners, a decrease in the number and species was noted, with the DENR team observing mostly egrets and herons in the area.

According to Paquito Moreno, executive director of DENR in Central Luzon, this pose another challenge to the protection and conservation efforts of the DENR.

“Candaba swamp is an important wetland area in the country. It supports an average of 7,000 migratory bird every year coming from as far as Siberia, Japan, China and New Zealand to seek wintering refuge, feeding and breeding area from October to March,” he said.

He appealed to the local community and local government units (LGU) to help the DENR in the protection of migratory birds and their habitat.

“Candaba swamp is not only an important habitat and potential eco-tourism area that draws attention of local and foreign tourist and bird watchers from across the globe, it also acts as a natural sewerage treatment plant (STP), as it filters toxic chemicals coming from the upstream water of the Pampanga river before it drains to Manila Bay,” he said.