• The implementation of the EAGLE Award is consistent with government laws and regulations, primarily Executive Order No. 192 (Reorganization Act of the DENR), Civil Service Commission Memorandum Circular No. 2001-01 (Program on Awards and Incentives for Service Excellence or PRAISE), and the DENR Rationalization Plan approved by the Department of Budget and Management.
• The guidelines are provided under the DENR Administrative Order (DAO) No. 2019-04 issued on March 8, 2019.
• Its main objective is to promote a culture of organizational and leadership excellence by determining the efficiency and effectiveness of field officials in delivering their mandates and recognize and commend them accordingly.

The EAGLE applies to the following field officials, who should have occupied their positions for at least nine (9) months in 2018:

• The Performance Evaluation Rating for qualified key officials is broken down as follows:

• Leadership will be gauged on the following abilities, based on perception survey among superiors, subordinates, and/or peers:

a. Integrity through adherence to, and promotion of, core principles and values prescribed by the DENR Code of Conduct and Ethical Standards
b. Service orientation in ensuring production and delivery of quality outputs, results and outcomes to achieve consistent customer satisfaction
c. Network building to establish and/or strengthen partnerships or networks that will facilitate the realization of organizational outcomes
d. Strategic focus in obtaining information and identifying key issues, and consequently committing to a course of action relevant to achieving long-range goals or vision
e. Managerial acumen to harness and focus human and financial resources to help achieve organizational goals

• Designated assessment teams consisting of selected officials and personnel from the Central and regional offices evaluated the nominees by reviewing documents and field verification. 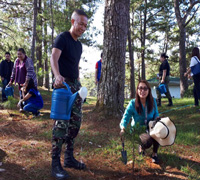 Around 3,500 Benguet pine trees have been planted within the compound of “The Mansion” in Baguio City as part of the ongoing efforts to increase the number of tree species that the mountain resort city is famous for, according to the Department of Environment and Natural Resources (DENR).

DENR-Cordillera Administrative Region Executive Director Ralph Pablo said the move was in line with the directive of DENR Secretary Roy A. Cimatu, who earlier expressed concern over the declining number of pine trees in the city.

“Secretary Cimatu’s order was to saturate Baguio with the smell of pine trees again and restore the city’s claim to being the City of Pines,” Pablo said.

Close to 350 members of the Presidential Security Group took part in the tree-planting activity, which covered some two hectares of The Mansion’s open grounds.

The Mansion is the official summer palace of the Philippine president. It is located at the eastern part of Baguio City, along Leonard Wood Road and across Wright Park.

Some 11 hectares, or around 74 percent of The Mansion’s 14.7-hectare area, is partially forested or classified as “open forest.”

Cimatu subsequently ordered Pablo to conduct an inventory on the city’s number of trees and think of solutions on how to address the dwindling number of the iconic Benguet pine trees, so the DENR could take steps to preserve and protect them.

Benguet pine trees, some measuring up to 124 centimeters in diameter, number around 351,493 or 14 percent of the total count.

Of the total Benguet pine trees, 79 percent or 277,148 are concentrated in areas classified as “closed forest” or “closed canopy” like Camp John Hay reservation, and forest parks near the Teachers’ Camp and the PMA.

The city’s open forest, such as the area where the 3,500 saplings where planted, has 70,735 Benguet pine trees with 3,610 others found in residential areas.

Miscellaneous trees account for half of the inventory of Baguio’s tree cover at around 1.2 million which include alnus, eucalyptus and calliandra trees.

Also included in the inventory are 885,268 young trees of all types, naturally-growing under matured trees.

Called “regenerants,” these young trees measure less than five centimeters in diameter and at least one meter in height.

Pablo cited the intensified construction boom and expanding urban sprawl as among the reasons for the noticeable decline of pine trees in the nation’s summer capital.

To address this, Pablo said one of the strategies the DENR regional office has adopted was to discourage lot owners applying for cutting permits to spare the pine trees.

The regional office, he said, has been promoting the benefits of having the trees in their area instead of cutting them down to give way for either construction or expansion of their houses.

“Sadly, the conventional mindset is that trees should go to maximize the floor space of a house. We explain to them the direct and indirect benefits of keeping these trees both to them and to the city, and the added-value they give to their houses as an investment,” he explained.

“Secretary Cimatu’s order was to saturate Baguio with the smell of pine trees again and restore the city’s claim to being the City of Pines,” sabi ni Pablo.

“Sadly, the conventional mindset is that trees should go to maximize the floor space of a house. We explain to them the direct and indirect benefits of keeping these trees both to them and to the city, and the added-value they give to their houses as an investment,” dagdag pa nito.